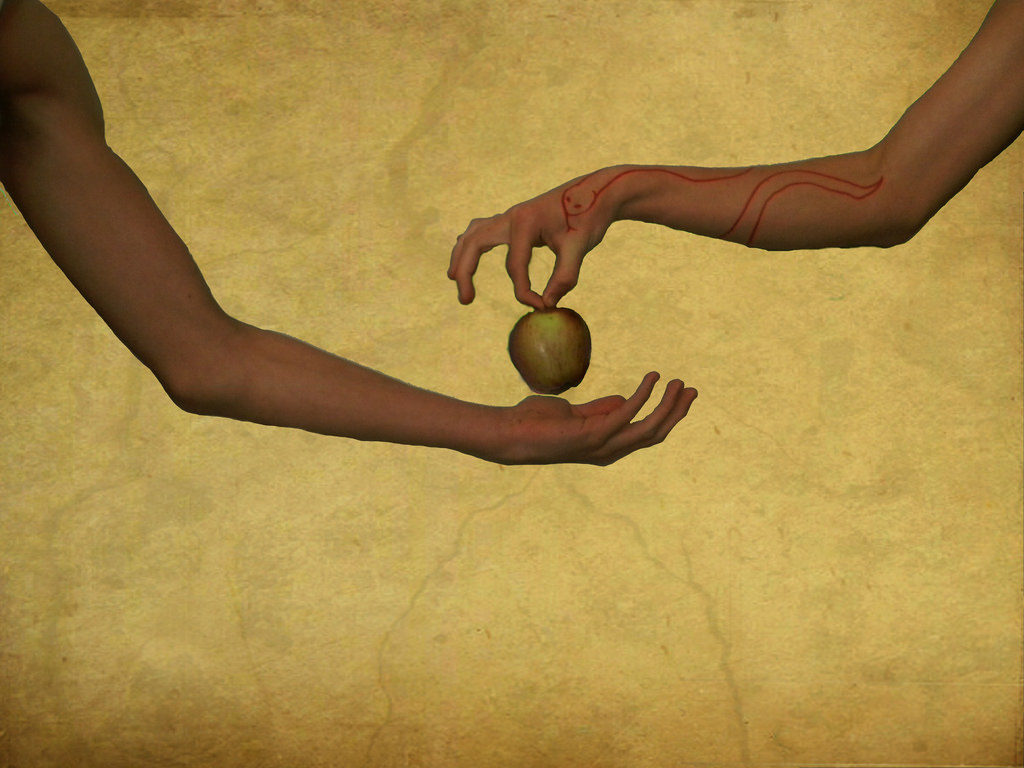 In Rom 1:18, Paul is very early in the development of his two-dimensional theology of justification.  He is concluding the formal introduction of a tri-vernacular euangelion (Rom 1:1-19) and he is transitioning into his next major section on sin and death (Rom 1:20-3:20).  In this reference to the revealed wrath of God, it is not altogether unlikely that he has in mind that Satan is God’s appointed instrument of wrath upon the flesh of mankind in the current age.  When God cursed the serpent crawl in the dust and to eat the dust (Gen 3:14), Satan became the ruler of all spiritually-dead flesh, which was formed from the dry dirt of the ground (cf. Gen 2:7, 3:19, 18:27).  It is not a mere coincidence that the Hebrew words for Adam and ground are virtually identical; adam (means “mankind” or “Adam”) and adamah (means “ground” or “earth” or “land”).  Adam was formed from adamah.  Therefore, just as God had cursed the ground, so also he had cursed all flesh (Gen 3:17, 4:11, 5:29).  Roman’s is the systematic doctrine of God’s plan to save mankind from His curse upon all flesh and to bring the execution of judgment against the dominion of Satan for its active opposition to God’s plan of salvation.

Paul’s view of the satanic nature of opposition to his good-message (Rom 2:16, 16:25) is in clear view early in His first missionary journey, when he calls the Jewish magician a “son of the devil” for opposing him before the Roman proconsul of Cyprus at Paphos. (Acts 13:6-12)  In Paul’s theology, to be absent God’s grace is to be subjected to the destructive forces of Satan upon the flesh. (cf. 1Cor 5:5, 1Tim 1:20)  Thus, the community of believers that would walk in Paul’s good-message were sheltered in God’s grace, thereby becoming sanctified away from “the wrath of God” that manifests in mankind by Satan’s hunger for all flesh, which is made from the dust of the ground.  The active suppression of this sanctifying grace within the church is the object in the scope of Paul’s elliptic and cryptic early polemic against “the dissention” (Rom 16:17) in the closing passage (Rom 1:17-19) of the introductory section of Romans (Rom 1:1-19).  His diatribe against the Jewish-Christian opposers will continue and intensify in Romans chapter two.

In this manner, the justice of God (i.e. the truth) that is contained in “the good-message of His Son” was stifled in injustice.  The injustice was that God’s justice was being suppressed.  The men who stood in active opposition to Paul were embarrassed and ashamed of the euangelion (cf. Rom 1:16a), the form of manifested piety in spiritual worship toward God (Rom 1:8), and they did not want anyone in their communities to practice in it.

At the end of the letter Paul warned the church to “stay away from the dissension, for such ones do not serve in our Lord, the Christ, rather [they serve] the ‘of themselves’ appetite, and through cunning speech and flattery they deceive the hearts of the innocent.” (Rom 16:17-18)  Paul likely had in mind here the remarkable similarity between Satan’s deception in the garden (Gen 3:1-7) against the Adamic Covenant (Gen 1:26-28) and the current deceptions against the New Covenant in the fledgling young church communities:

a)      Satan’s self-serving appetite for the innocent woman, and his cunning speech and flattery in deceiving her into opposing God; and God’s condemnation that restricted Satan to crawl in the dry ground and eat from it, thus restricting Satan to dominion over all spiritually-dead flesh.  In other words, God gave Satan dominion over the product of the serpent’s deception, that is, fallen humanity.

b)      The self-serving “of themselves” appetites of the dissension, “those suppressing the truth in injustice” “through cunning speech and flattery,” which drove their deception of the innocent to join them in opposing “the good-message of His Son”; and God’s condemnation against them as “the wrath of God is revealed.”  In other word’s, Satan continues to exert dominion through the dissension upon those who have been redeemed and now belong to Christ.  This will not end well for Satan.

Like the serpent of old in perpetrating injustice against God by deceiving the woman, the activist opposers “suppressed the truth” in perpetrating this same injustice against God by deceiving “the called of Jesus Christ.”  For this reason, just as God judged the serpent of old, so also God now directs His judgment and, therefore, His wrath against “those suppressing the truth,” that is, the truth according to “the good-message of His Son.”  In other words, God condemns those who actively deceive “the called of Jesus Christ,” that is, the ones who are called to re-present the truth on earth.

It would be no small irony to the dissension (v. 16:17), and even a supreme paradox, if they were to be given a true understanding of the revelation that Paul had received from God, knowing that the form of piety so hated by them (that is, spiritual worship to God according to “the good-message of His Son”) is actually God’s instrument for judgment and wrath against them as the divine response to their active opposition to God.  To actively oppose “the good-message of His Son” is to actively oppose God and is to subject oneself to “the revealed wrath of God.”  Thus, Paul will quote LXX Deut 32:35 and Ps 94:1 in Rom 12:19 in his exhortation to those innocents within the church who were on the receiving end of the dissention, “Do not avenge yourselves, beloved, rather give a place for wrath, for it has been written, ‘Vengeance [is] Mine; I will repay,’ says the Lord.”  The vengeance of God is manifested through the “spiritually-spoken worship” (Rom 12:1) of the beloved of God, and is divinely directed against those who actively oppose this worship to God, that is, “the good-message of His Son.”